At the 2019 International Interdisciplinary Conference of The Society for Textual Scholarship, Professor Daniel Balderston was awarded the Richard J. Finneran Award, a prize given in recognition... View »

Empire and its Aftermath: Transhispanic Dialogues on Diaspora

Professor Jerome Branche will be conference convener on April 5 and April 6, 2019.  This conference on the Iberian empires and their aftermath will bring a much-needed interdisciplinary focus on... View »

March 26, 2019.  We are hosting an International Workshop on Post-Anthropocentrism tailored to advance ways of understanding the relationship between post-anthropocentric... View »

In recognition of Professor John Beverley’s retirement next year, the Department of Hispanic Languages and Literatures is hosting an international symposium titled, "JOHN BEVERLEY AND THE URGENCY... View » 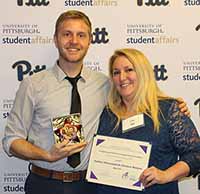 The award is from Student Affairs, the Office of... View »

Hillman Library has become the first U.S. library to own a complete collection of the Biblioteca Punena, a collection of some 200 volumes relating to the cultural history of the Andes.

We are proud to announce that our former colleague, Gerald Martin, was awarded an honoris causa doctorate by the University of Warwick.  During the period 1992-2007 he was the Andrew W. Mellon... View »

Two faculty are promoted to Full Professor
We are pleased to announce that Elizabeth Monasterios and Jerome Branche have both been promoted to full professors in the Kenneth P. Dietrich School of Arts and Sciences. View »

Here's a contemplative article about choosing a humanities degree from the BBC:

Why ‘worthless’ humanities degrees may set you up for life

Send feedback about this site